The Grand Palace of Bangkok, the Temple of the Emerald Buddha and Wat Phra Kaew (or Wat Pra Kaew) are, without a doubt, the most famous landmarks in Bangkok, often seen in many movies. Despite being such a touristic icon, this is still the number one place to see while in Bangkok, a marvel of delicate and intricate craftwork, architecture, carving and painting. Wat Phra Kaew is described at length on so many websites; we will not get too much into details, just a few facts and a lot of photos.

The official name of the temple is Wat Phra Si Rattana Satsadaram. Still, many call it ‘The temple of the Emerald Buddha’ and is on the Grand Palace’s ground, another historical monument that used to be the Royal Residence.

When entering the temple ground, the first thing you’ll see is the black stone statue of the ‘Hermit Doctor’, considered a patron of medicine, which is believed to have healing powers. Each day, relatives of the sick and infirm pay respects and offer incense sticks, fruit, lotus flowers, and candles.

Among the many Wat Phra Kaew buildings, the most photographed is probably the massive shiny golden Chedi called Phra Si Ratana, a 19th-century stupa built in Sri Lankan style, enshrining the ashes of the Buddha.

The second most visited is the large ‘Ubosoth’, the ordination hall, where you can admire, but not take photos, the famous Emerald Buddha whose official name is ‘Phra Phuttha Maha Mani Rattana Patimakon’. 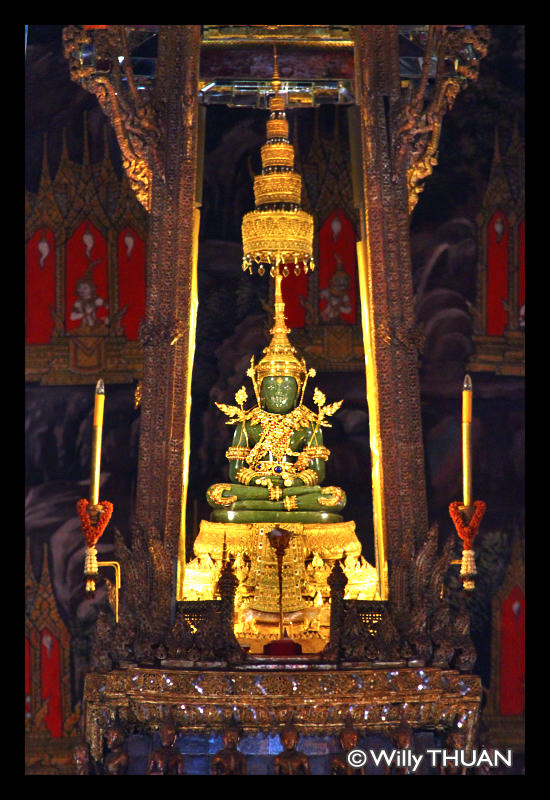 The Emerald Buddha is made of Jade and not emerald and is carved in a yogic position, known as Virasana. Originating from India in the 15th century AD, its history is long and troubled… after being transported to Sri Lanka, Cambodia, Laos, Ayutthaya, Chiang Mai, it was then kept in a shrine near the famous Wat Arun (The Temple of Dawn) until the capital of Thailand shifted from one side of the river to the other. The Emerald Buddha was finally enshrined in Wat Phra Kaew. The emerald Buddha in brilliant green colour is 66 centimetres (26 in) in height with a lap width of 48.3 centimetres (19.0 in).

The temple complex also has a famous Angkor Wat model, started by King Mongkut and completed by King Rama III.

Is there a dress code at the Grand Palace?

The dress code is strict, as you can see in the photo. If you forgot to wear the proper attire, you must buy one of those cotton elephant pants for 200 baht. Alternatively, you can rent one outside the temple for 50 baht or less if you are good at bargaining.

How to get to the Grand Palace of Bangkok?

The best way to reach Bangkok Grand Palace is by taxi or tuk-tuk, as there are no BTS around this area. You also can try by boat with the Chao Phraya River Express (disembark at Tha Chang pier).

Map of The Grand Palace

It's surf season again in Kata Beach 🙂
The waves are not very big, but it is a popular activity at this time of the year.

Big city rainy day. Guess which city this is. ...

The new Courtyard by Marriott in Phuket Town is really impressive! Without a doubt the best hotel in town, just 600 m from Thalang road where the famous Sunday market is. ...